The previous blog post discussed how to create a cross-platform Selenium UI test project using .NET core. This post discusses how to take those UI tests and run them in Azure DevOps Pipelines on both Windows & Ubuntu agents. To follow along, fork this GitHub repository which contains the UI test project necessary to follow along in this post. The code has slightly been modified to take advantage of a .runsettings file.

But before getting your hands dirty, let's talk about the two different ways of using Azure Pipelines.

Before YAML pipelines was introduced, you had to use the user interface to assemble both build pipelines and release pipelines. These pipelines are stored using JSON behind the scenes which you can export and import. This is now referred to as "Classic" Azure Pipelines.
Both Classic and YAML have their advantages and disadvantages.

Classic is the most feature rich with YAML slowly catching up. Before considering YAML it is important to evaluate whether all required features are supported by YAML pipelines. This post will guide you through creating a YAML build pipeline, but will use Classic for release pipelines because the YAML support for releases isn't strong at this moment.
Luckily some of the missing functionality is on the roadmap for YAML pipelines as you can read at the MS Dev Blog "Azure DevOps Roadmap update for 2019 Q3".

With that out of the way, it's time to build your build pipeline.

When using YAML pipelines, Azure DevOps will read your YAML configuration file and execute the steps as prescribed. To set this up, you'll first need to create the yaml file, and then tell Azure DevOps where to find it inside your repository.

In the root of your solution, add the following 'azure-pipelines.yml' file.

Refer to the comments which explain the different parts of the yaml file. In summary, when you push a commit to the master branch Azure DevOps will:

To use Ubuntu, swap "​Hosted Windows 2019 with VS2019​" with "Hosted Ubuntu 1604".
All the steps in the yaml-file should work on both Windows and Ubuntu. Possibly MacOS too but I didn't verify this.

Important note: You can use the DLL's produced on one platform and run them on a different platform. For example, when using a linux distro to build the MS Test project, you can execute the DLL's on Windows, MacOS, and any supported Linux distro.

Now that you have added the 'azure-pipelines.yml' file to your GIT repository, navigate to the Azure DevOps Build section in your DevOps project. 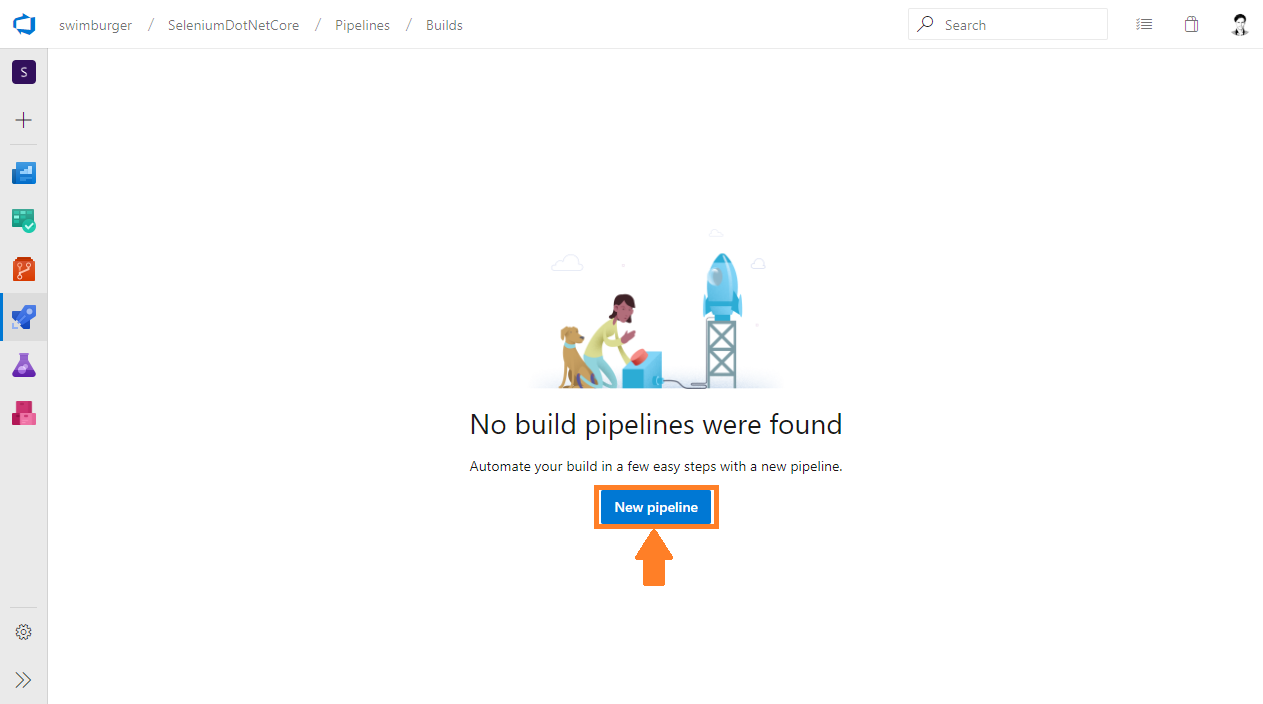 GitHub will be used in this walkthrough, but select wherever you store your source control repository in this step. 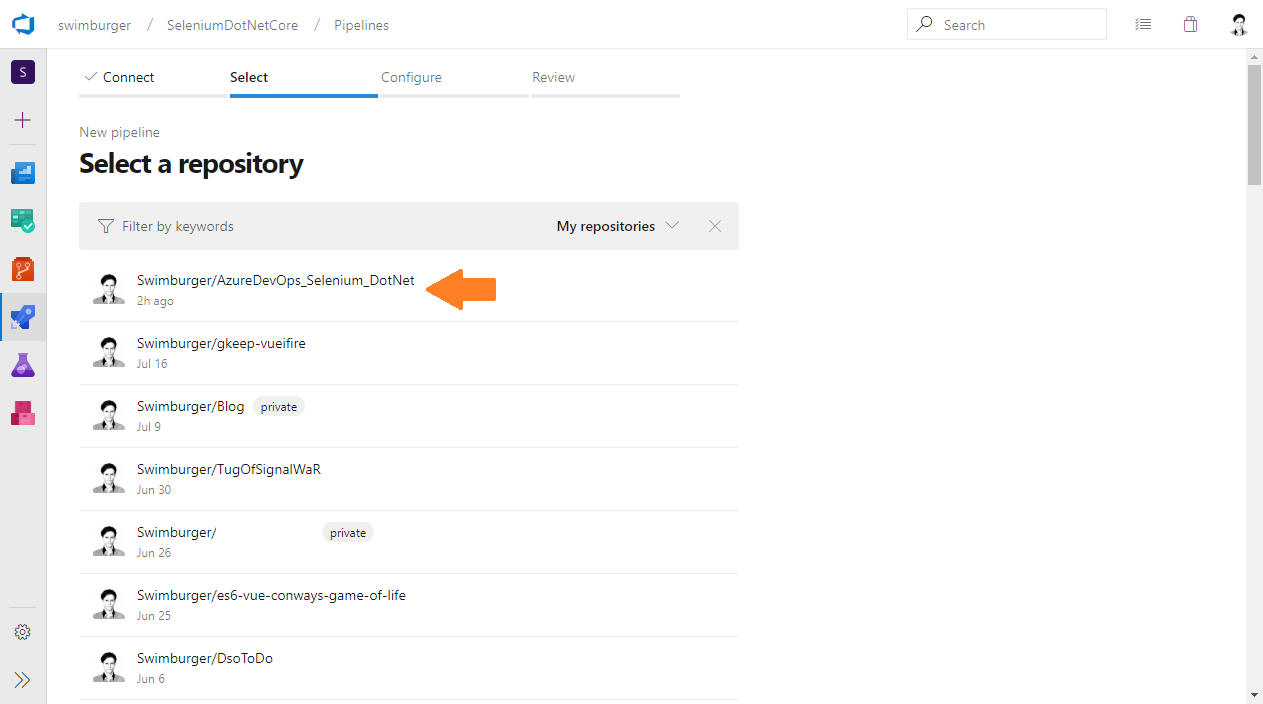 You already have an 'azure-pipelines.yml' file, therefor Azure DevOps will use that as the "Configure" step and skip to the "Review" step.
If you don't have the yaml file, Azure DevOps will offer you some starter templates and automatically commit the new yaml-file into your GIT repo. 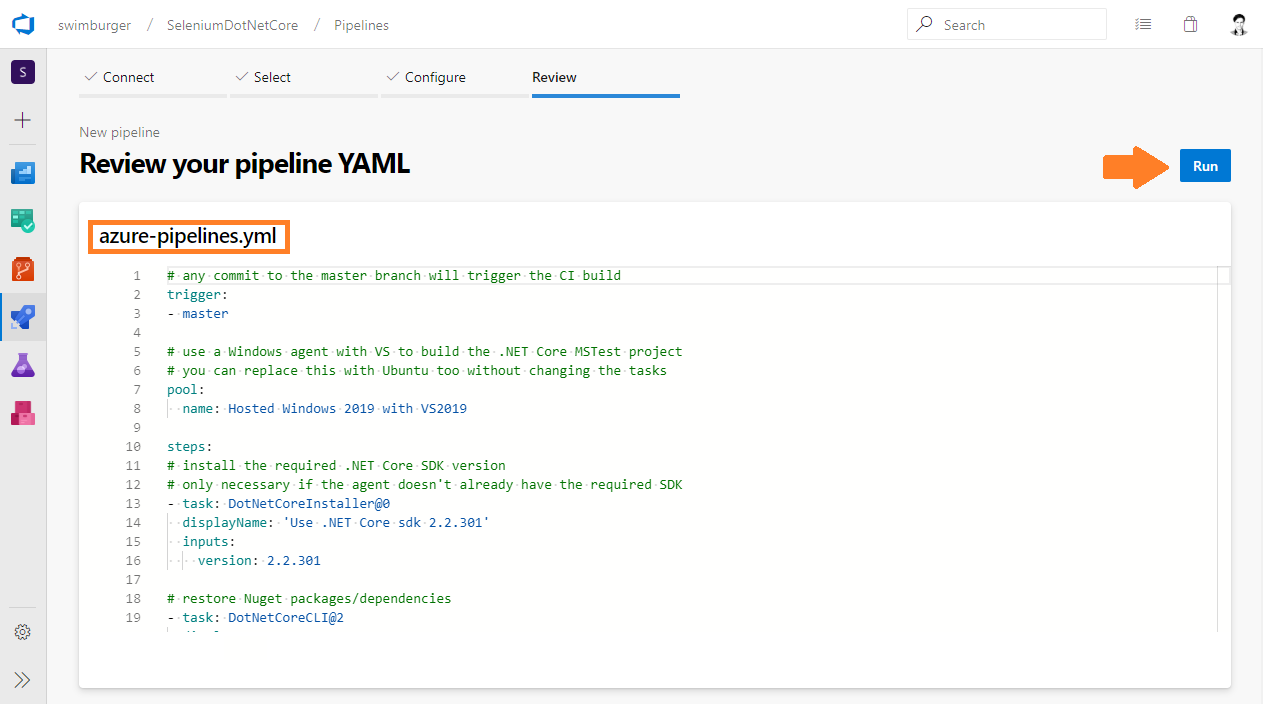 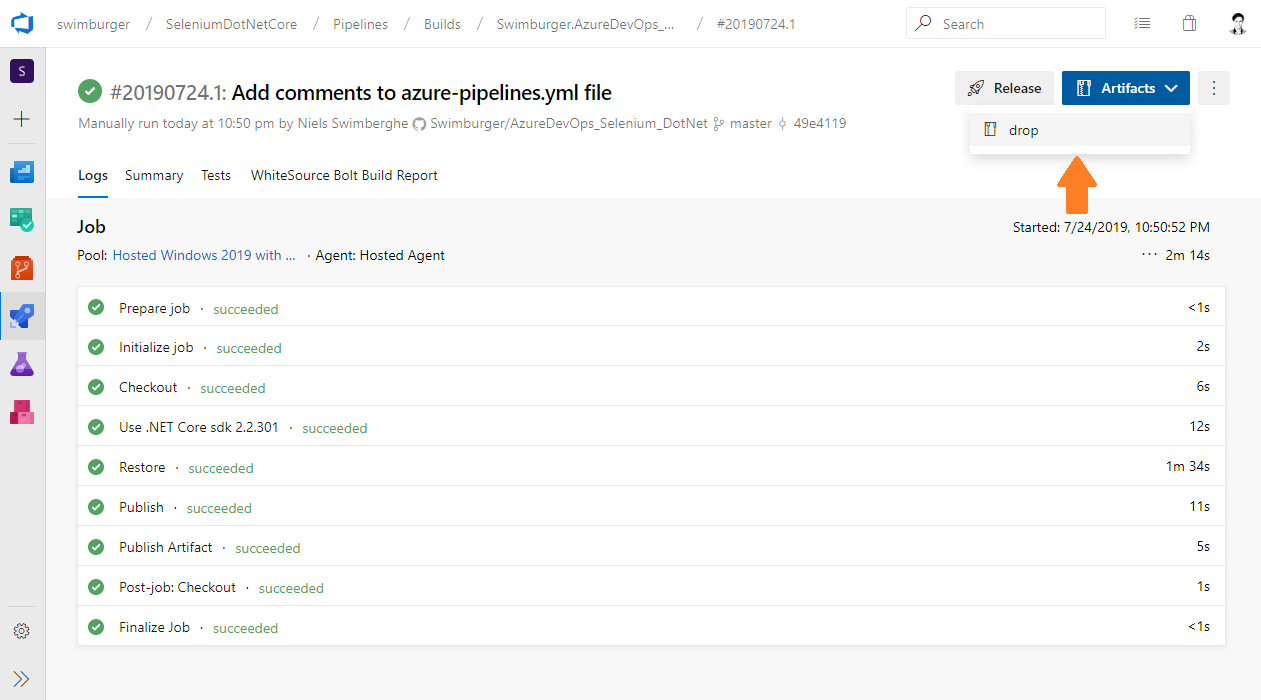 In the Artifact modal, you can explore and download the published build artifacts: 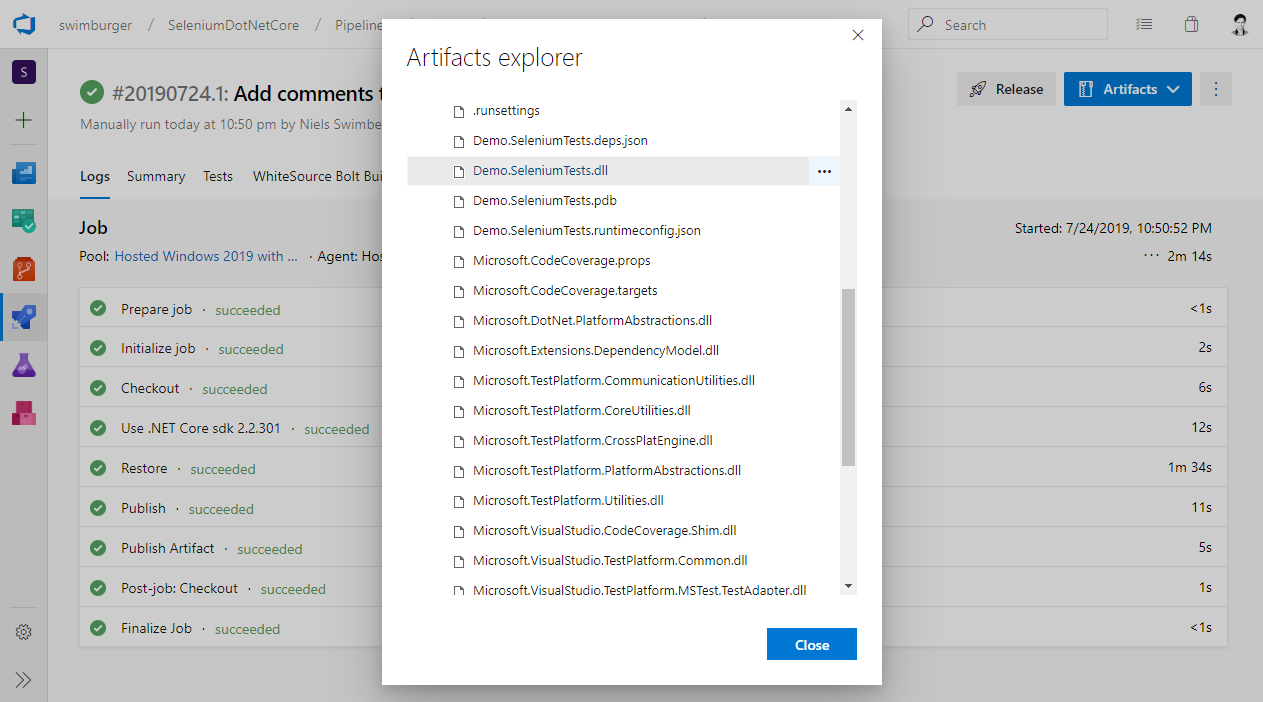 Now that you have a build artifact, you can move on to creating a Continuous Delivery pipeline which will grab the artifact. 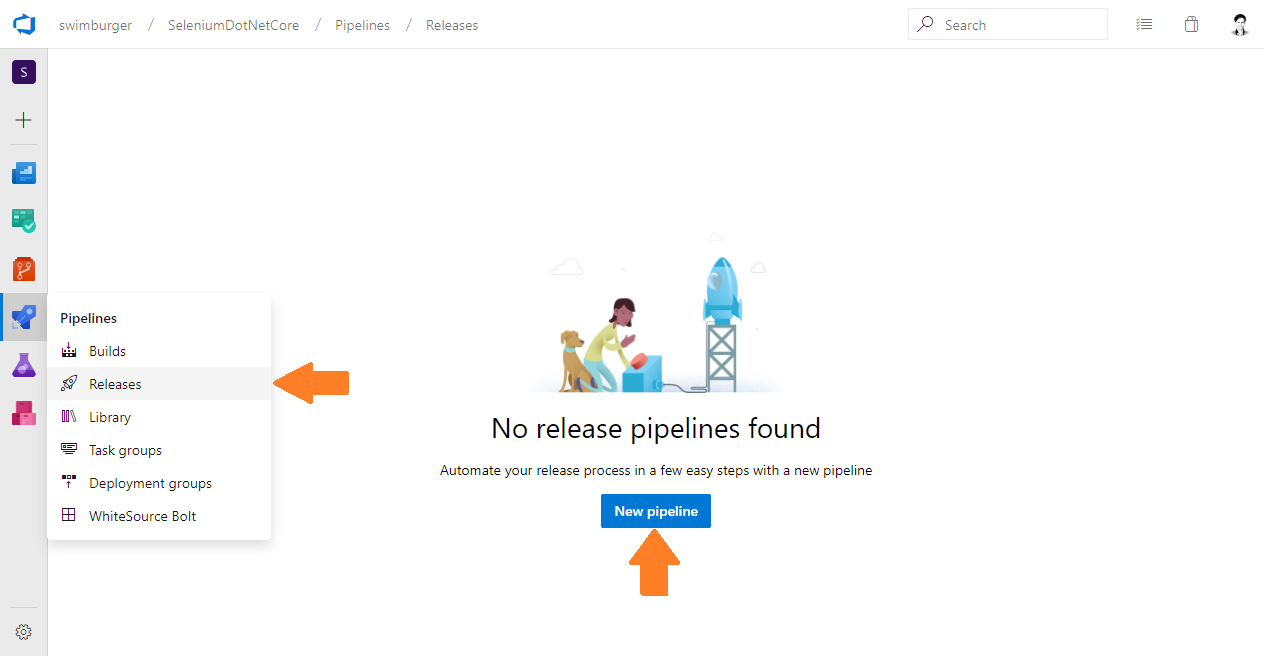 Navigate to the Releases tab and click the "New pipeline" button. 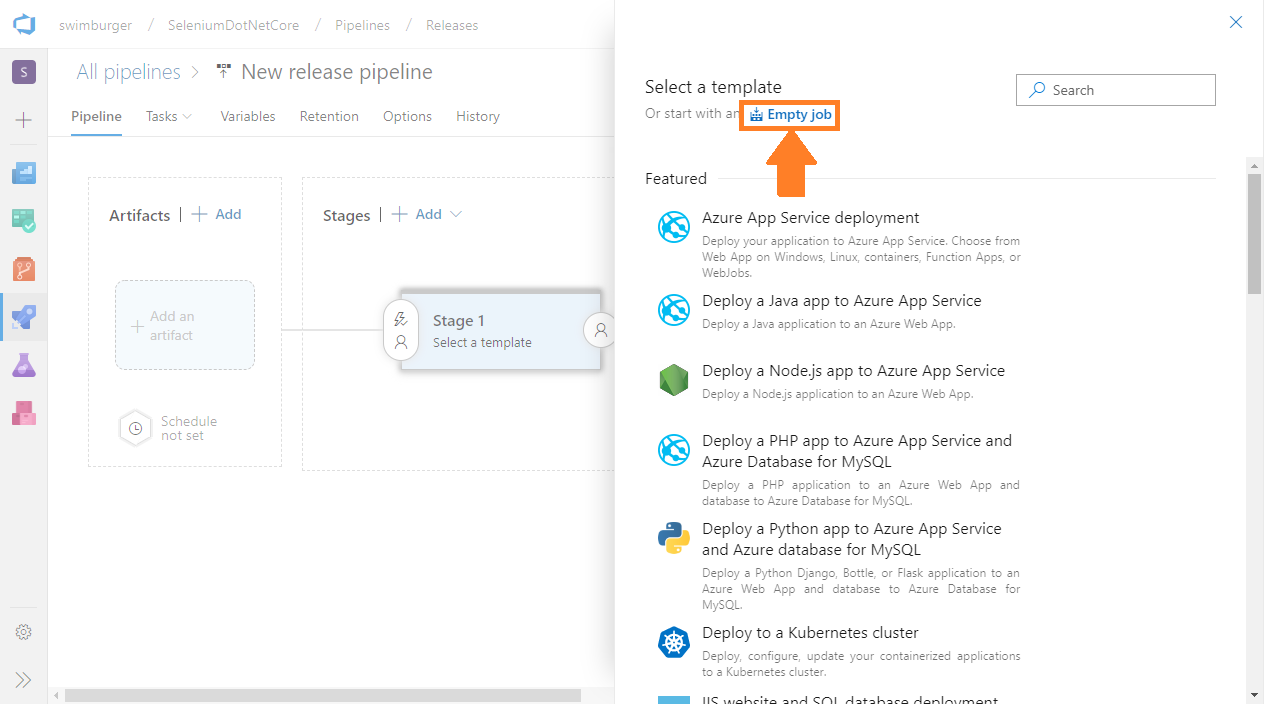 The new release pipeline will prompt you to select a starter template. These templates are great to get started quickly.
Alternatively, you can start using an "Empty job" to start from scratch. Click the "Empty job" link. 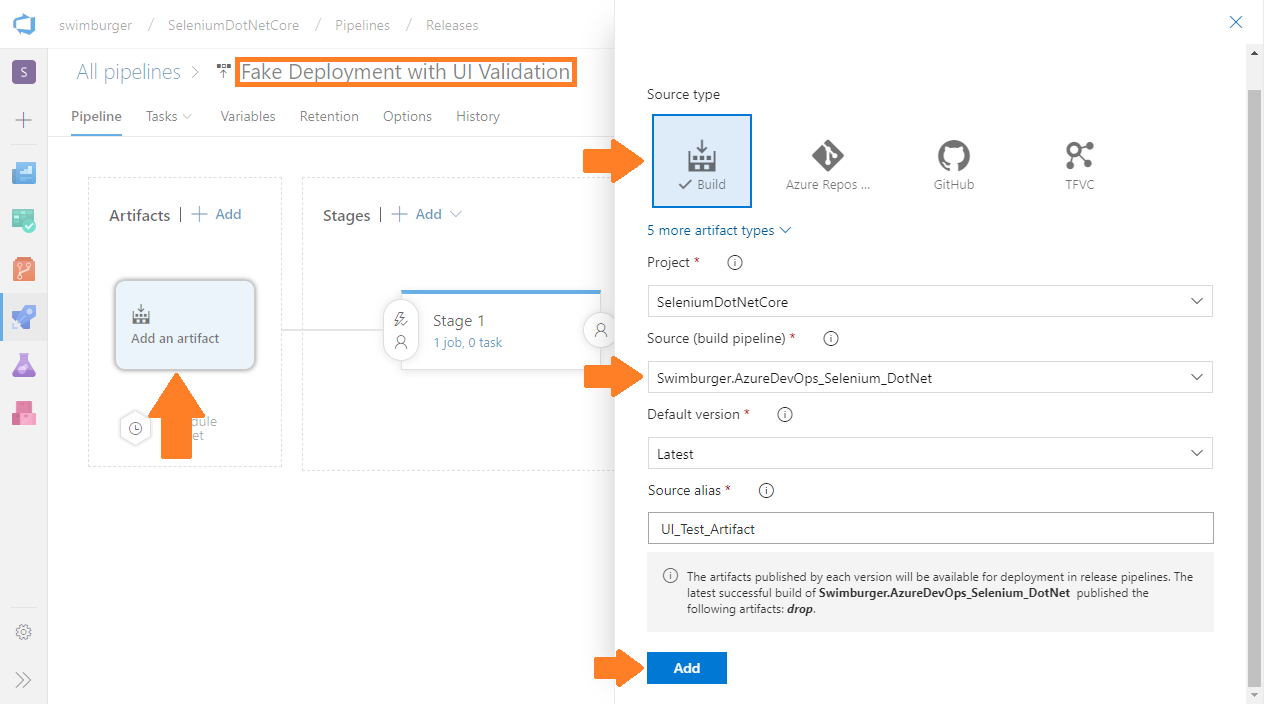 Rename the pipeline to "Fake Deployment with UI Validation".
Click on the "Add an artifact" area and match the configuration shown on the screenshot above.
Here's an overview of what these fields mean: 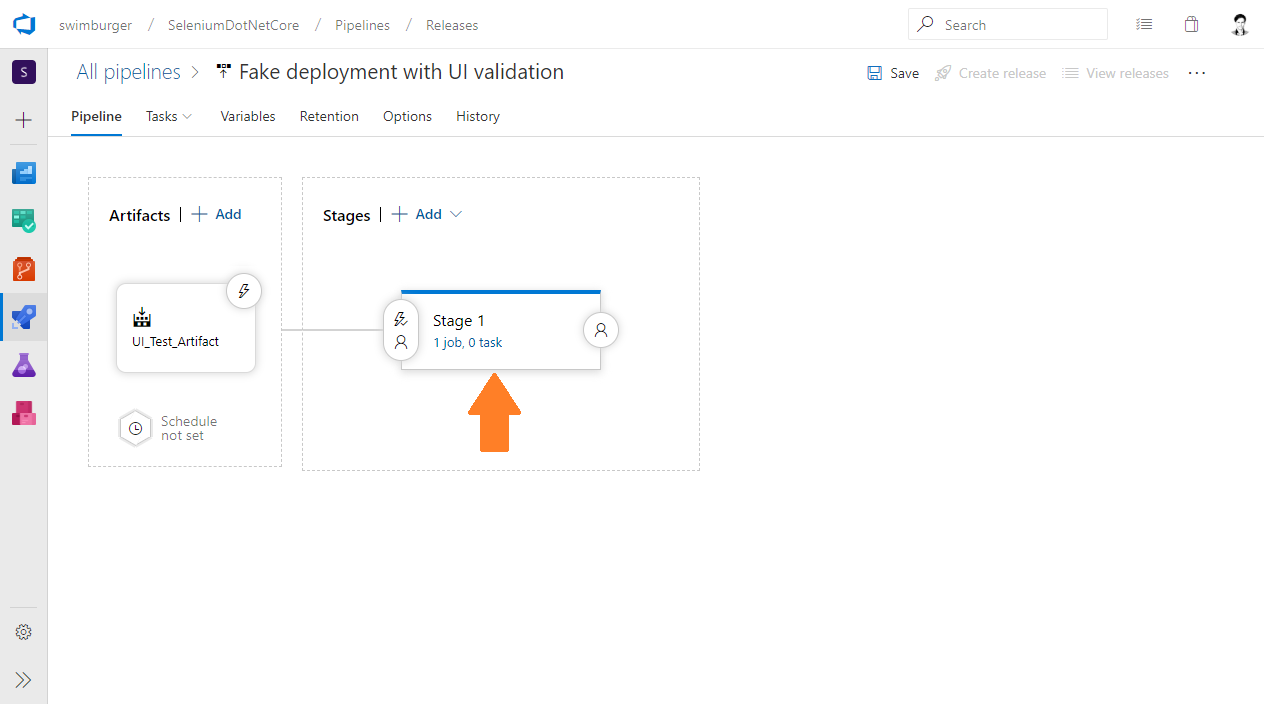 Click the "1 job, 0 task" link in the "Stage 1" stage to start configuring the jobs/tasks within the stage. 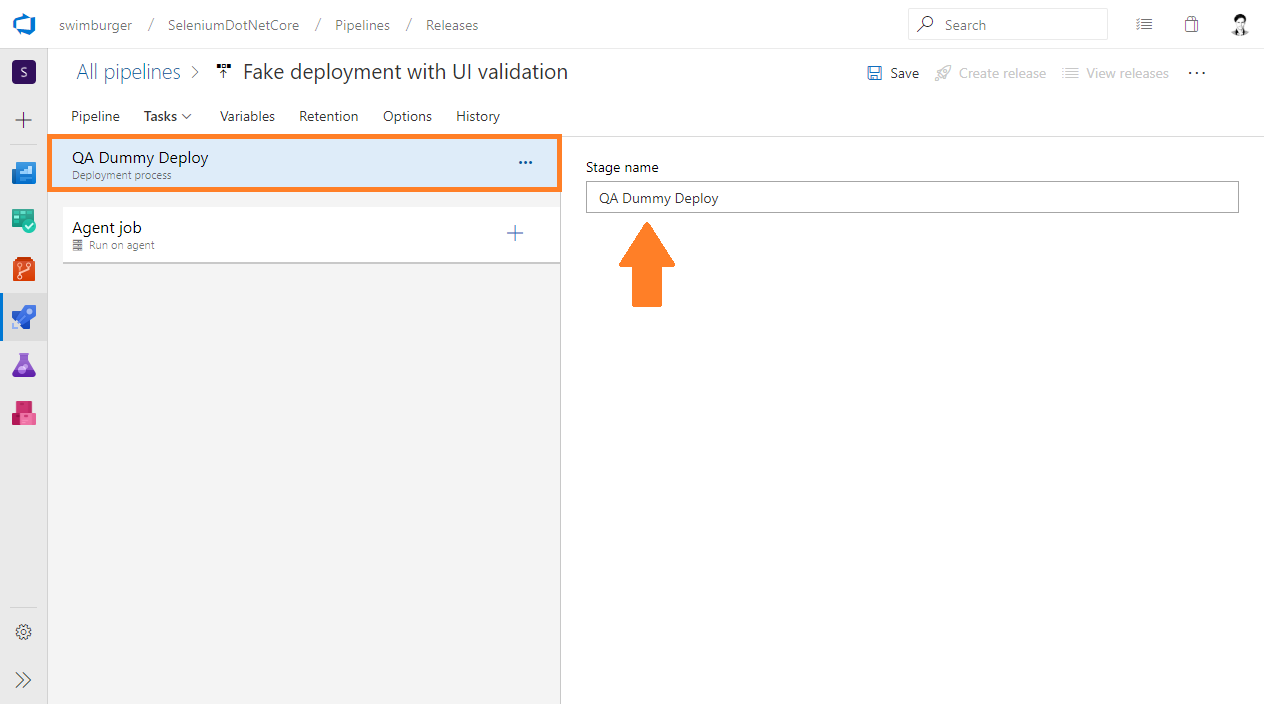 Rename the "Stage name" to "QA Dummy Deploy". This stage will not actually deploy anything, but let's pretend it does. 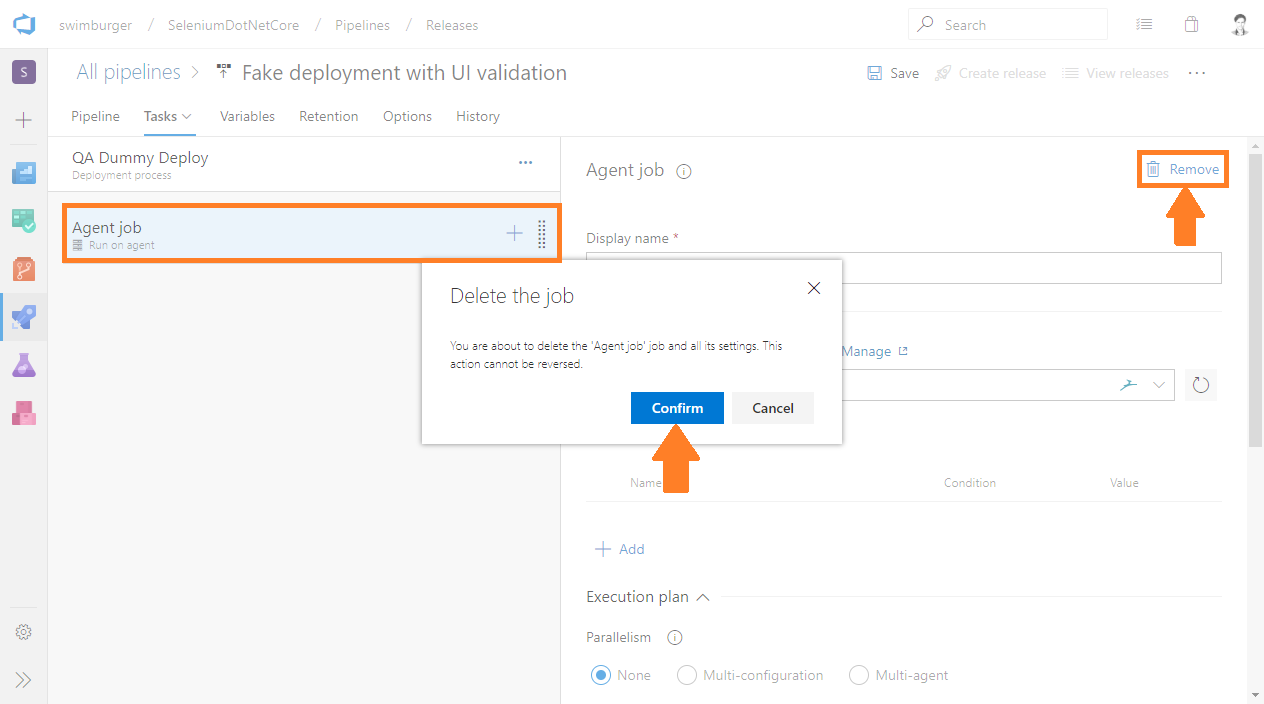 Select the "Agent job" and click the "Remove" link. 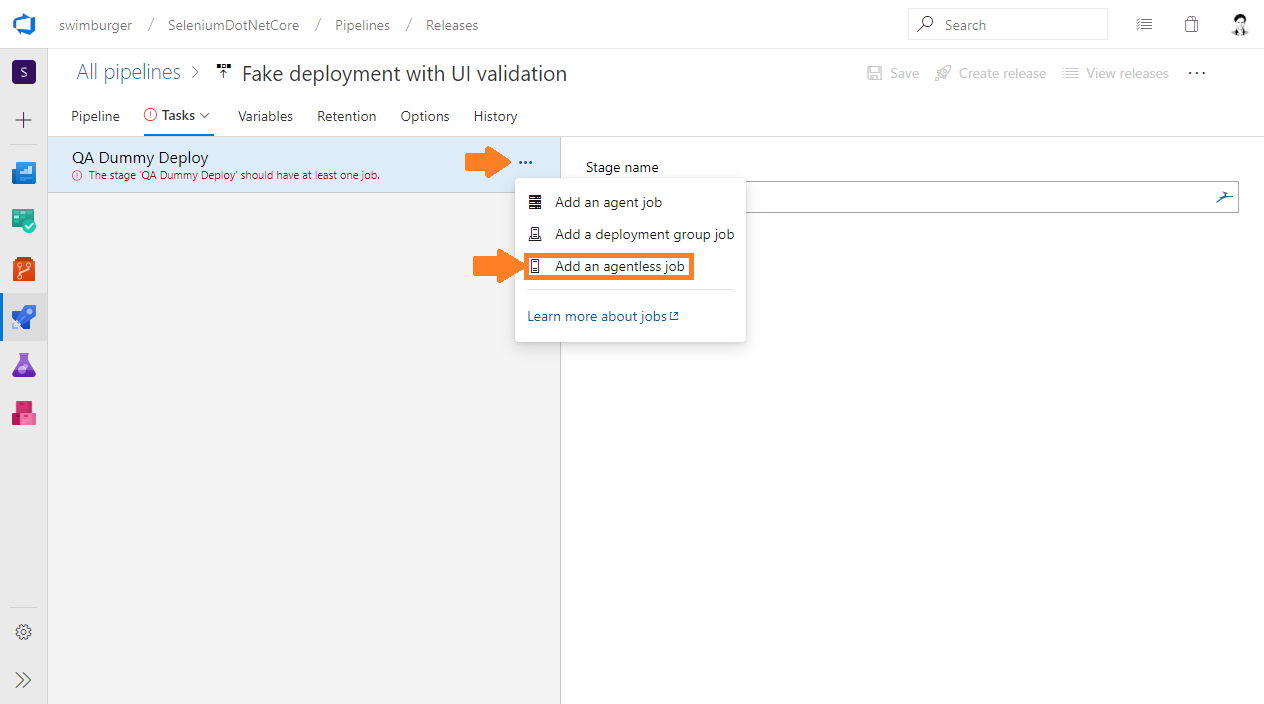 There are 3 types of jobs you can add to stages:

Since this is a dummy deploy stage, add an empty agentless job. This will be the fastest when run.
Click the three dots on the "QA Dummy Deploy" and click on "Add an agentless job" in the context menu. 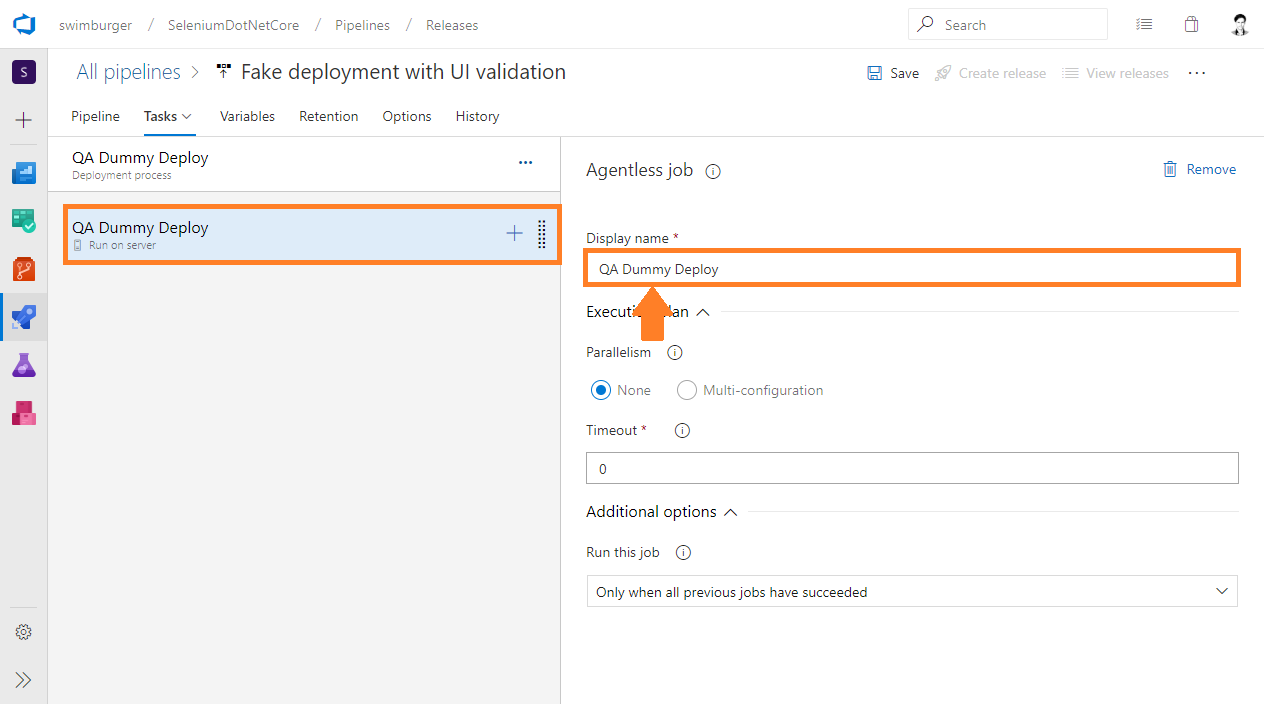 Rename the new job to "QA Dummy Deploy" as well. 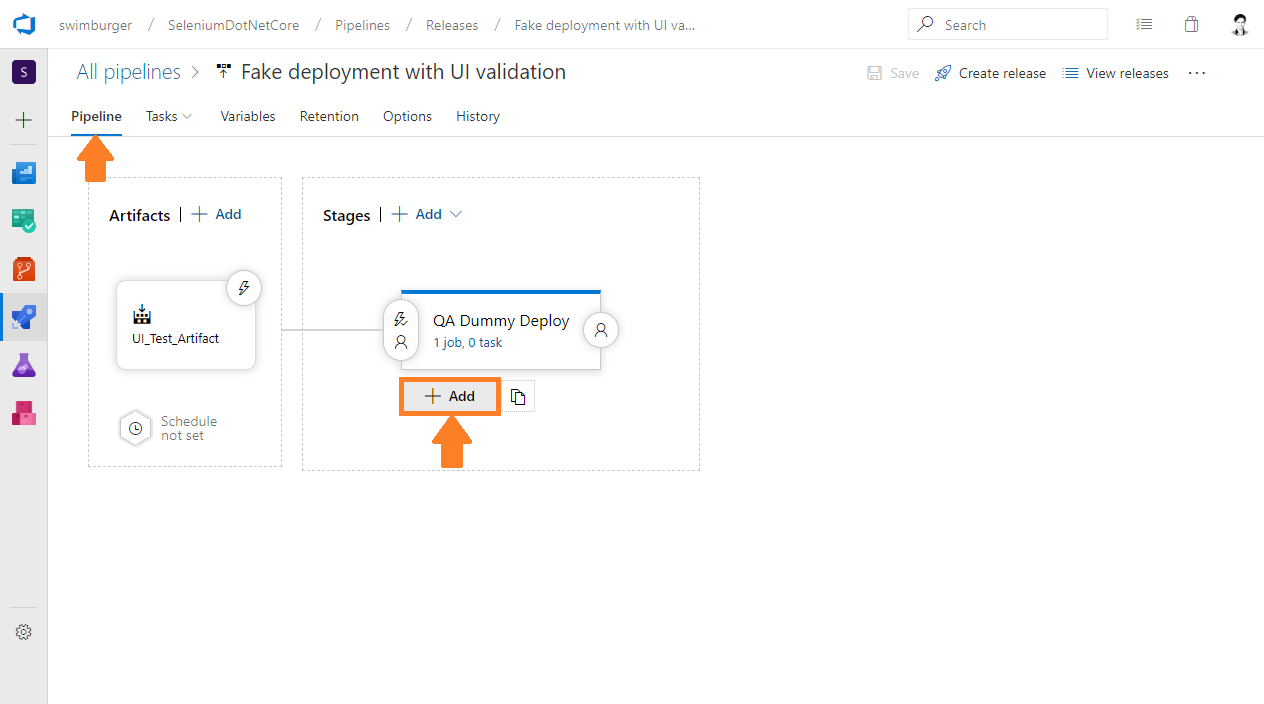 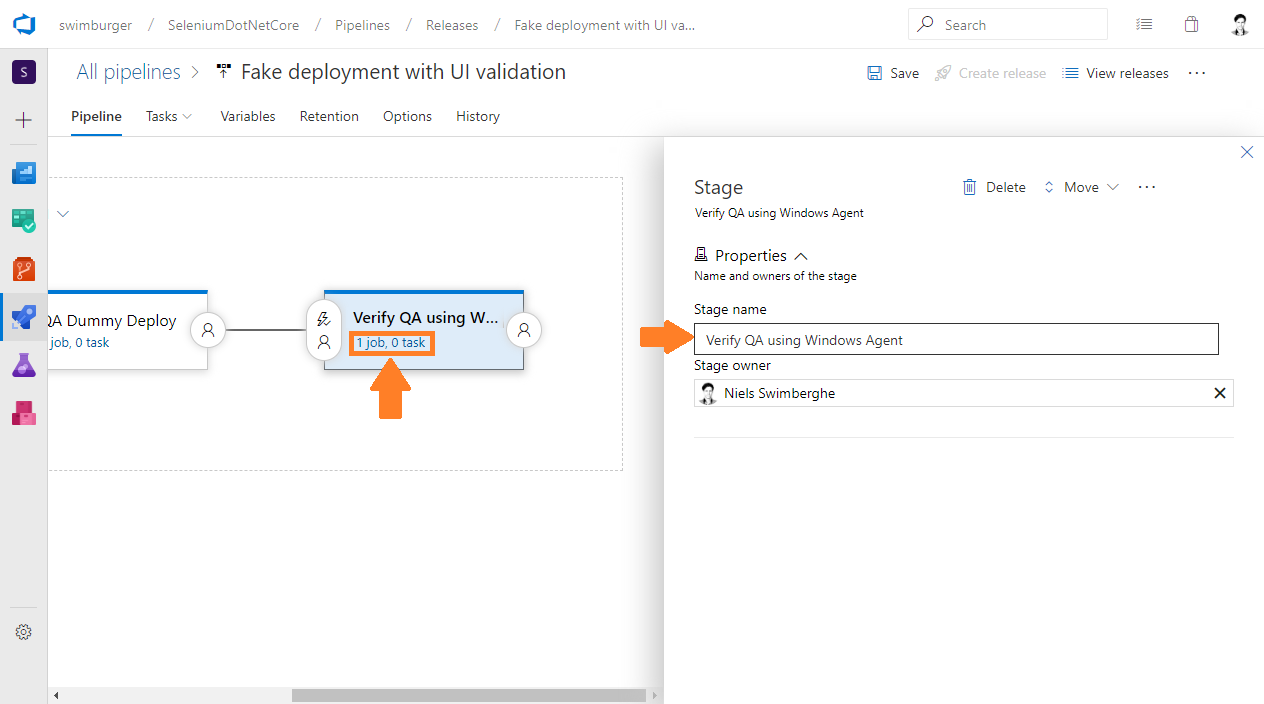 Rename the stage name to "Verify QA using Windows Agent" and click on the "1 job, 0 task" to navigate to the Tasks view of the stage. 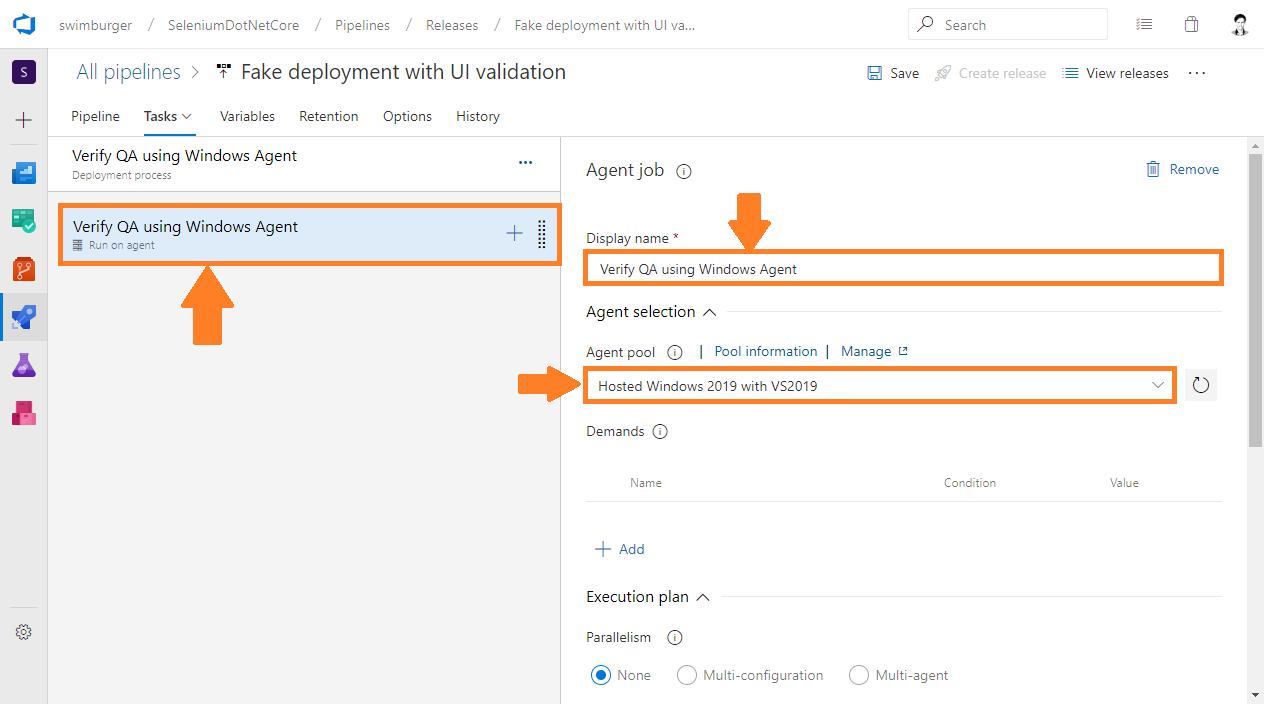 Rename the existing job to "Verify QA using Windows Agent" as well.
Change the "Agent pool" drop down to use "Hosted Windows 2019 with VS2019".
Agent pools determine what agent the tasks will be run on. Out of the box, Azure DevOps services will give you multiple pre-configured agent pools.
You can add your own agent pools by configuring your machines as an Azure DevOps agent. 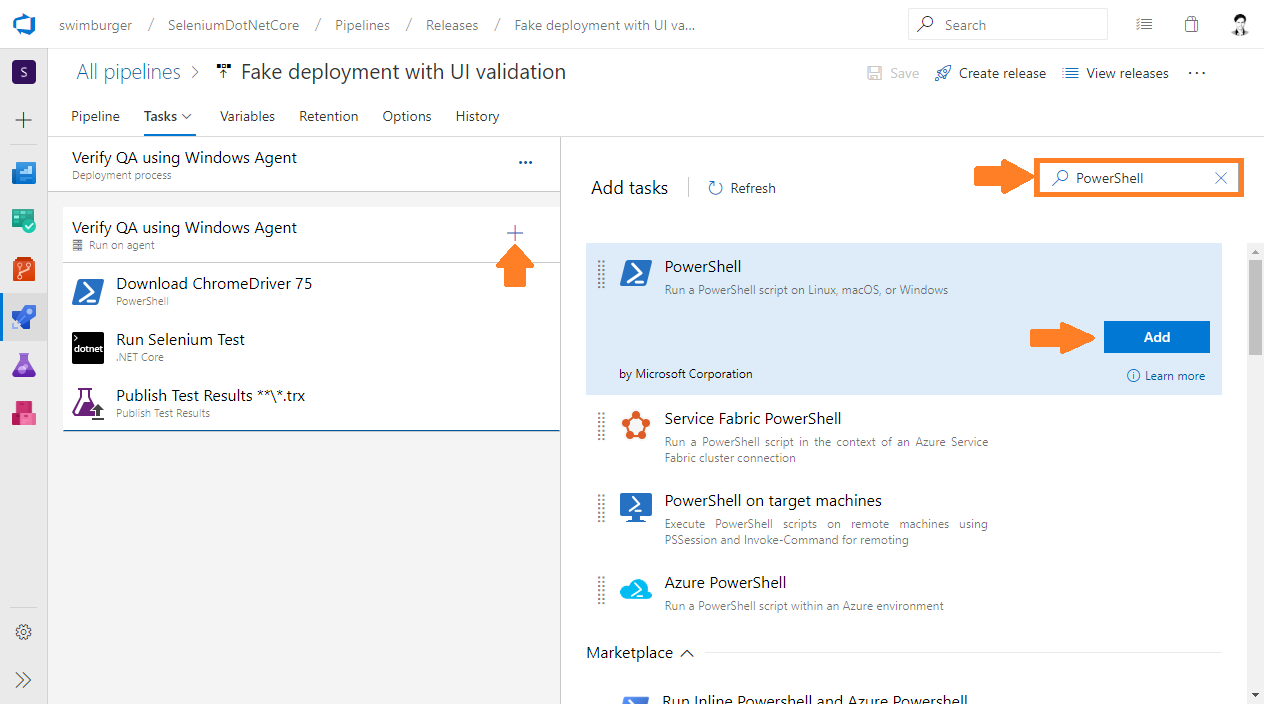 Configure the PowerShell task to match with the screenshot above: 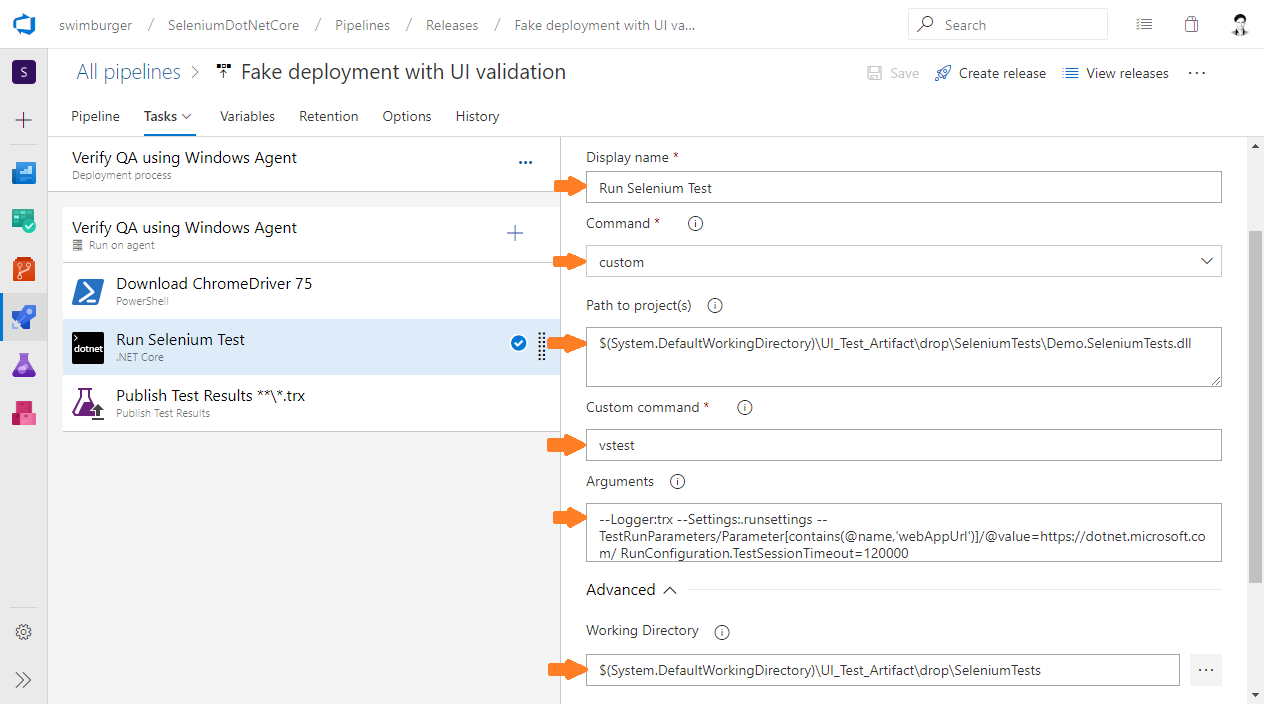 Add another task by clicking on the "+" icon. Search for the ".NET Core" task and click the "Add" button.
Configure the .NET Core task to match with the above screenshot:

The Arguments will be passed to the 'dotnet vstest' command. Here's what the arguments do: 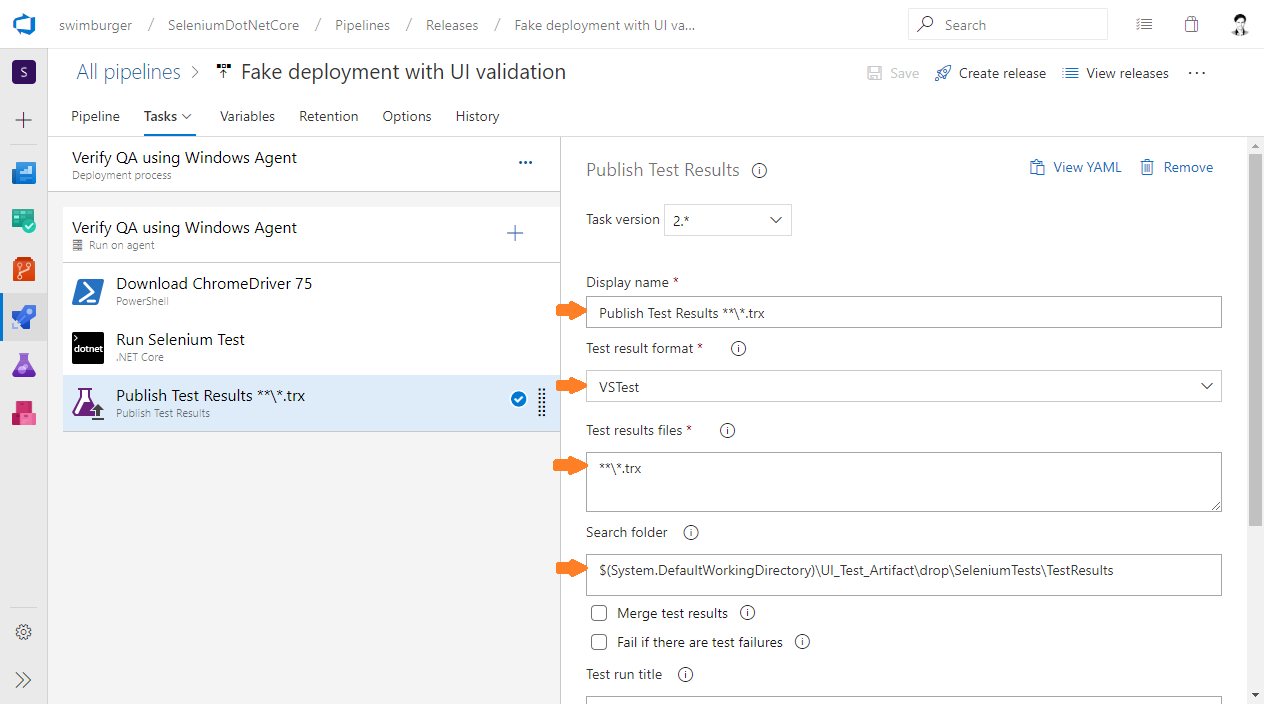 The last step is to publish the results of the test that are stored in the trx-file.
Add another task and this time look for "Publish Test Results".
Configure the task to match the screenshot above:

Now you have a working UI Test stage. You can try this by creating a new release. 🎊

To run the UI Test on Ubuntu instead of Windows, you can run the same tasks on Ubuntu with slight platform variations. 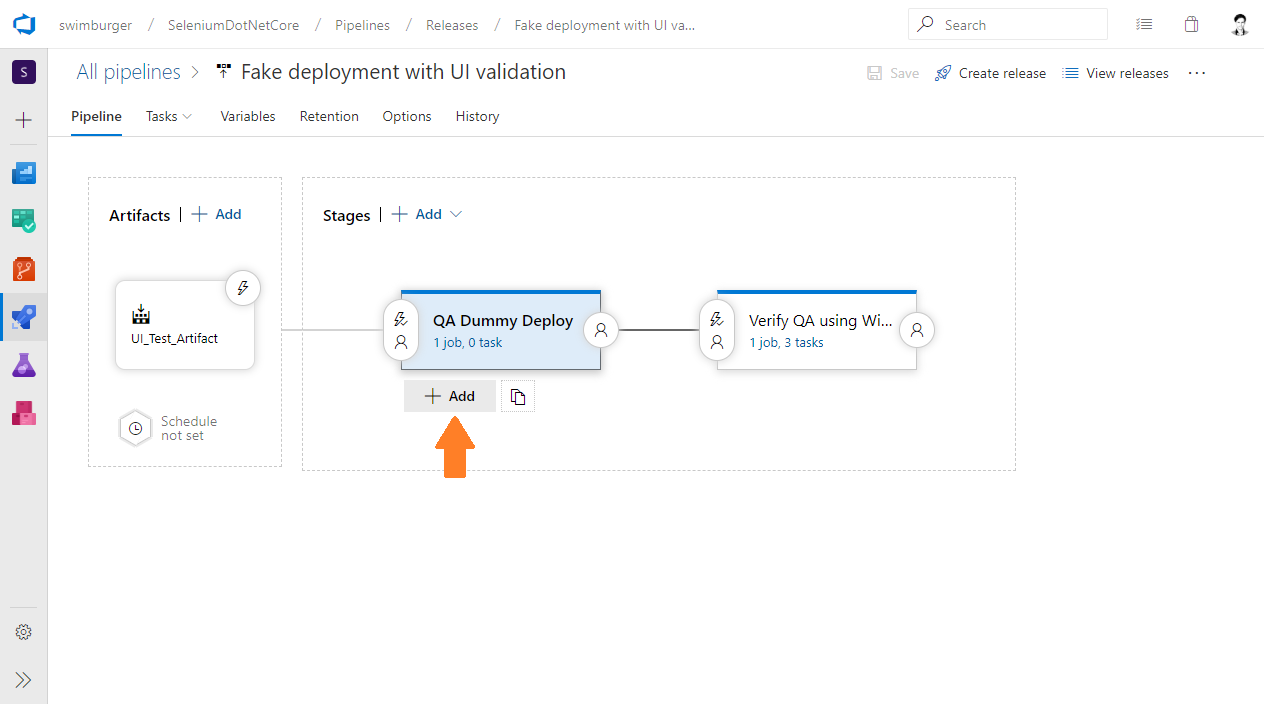 Click on the "Add" button underneath the "QA Dummy Deploy" stage.
This will create another stage that will run after the "QA  Dummy Deploy" but in parallel to the Windows stage. 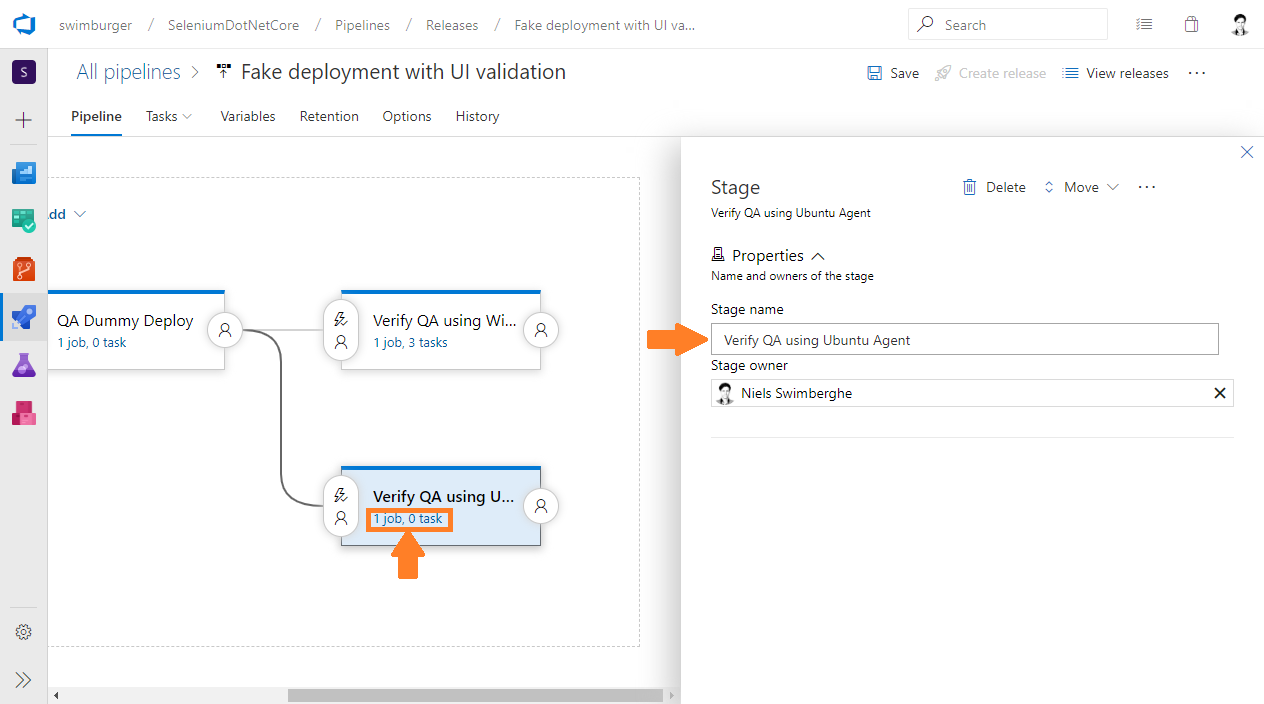 Rename the new stage to "Verify QA using Ubuntu Agent" and click on the "1 job, 0 task". 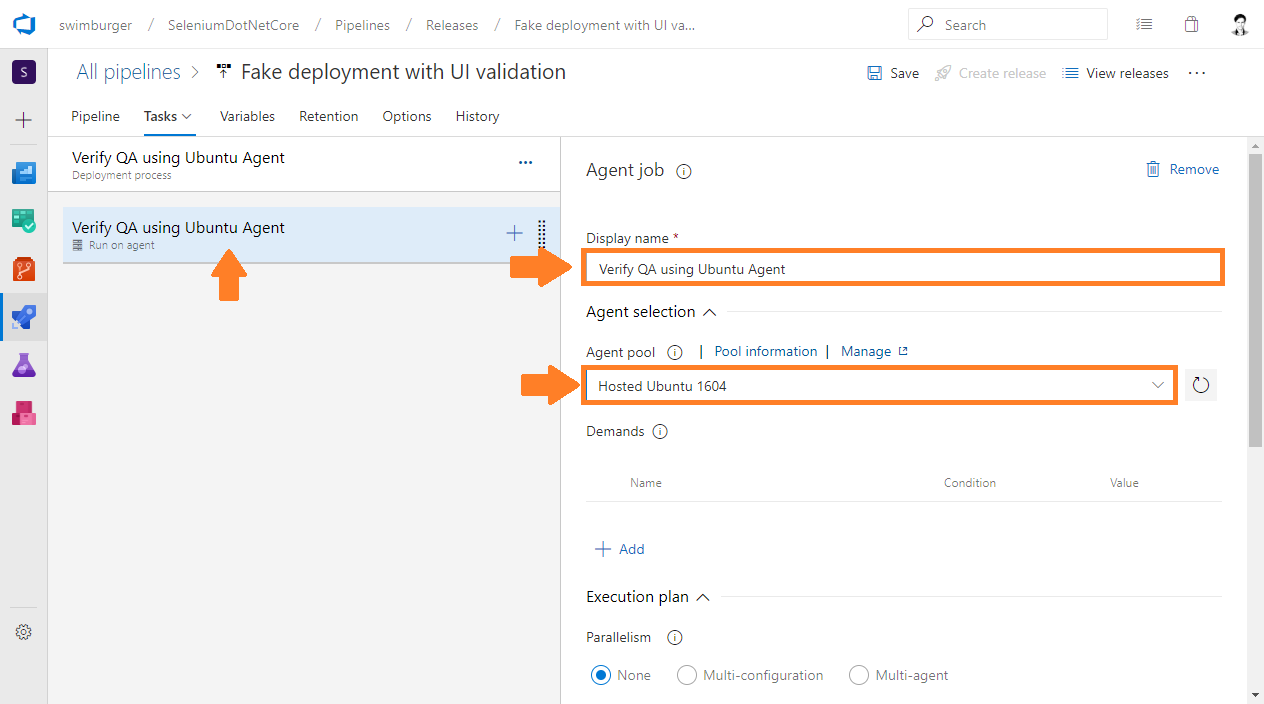 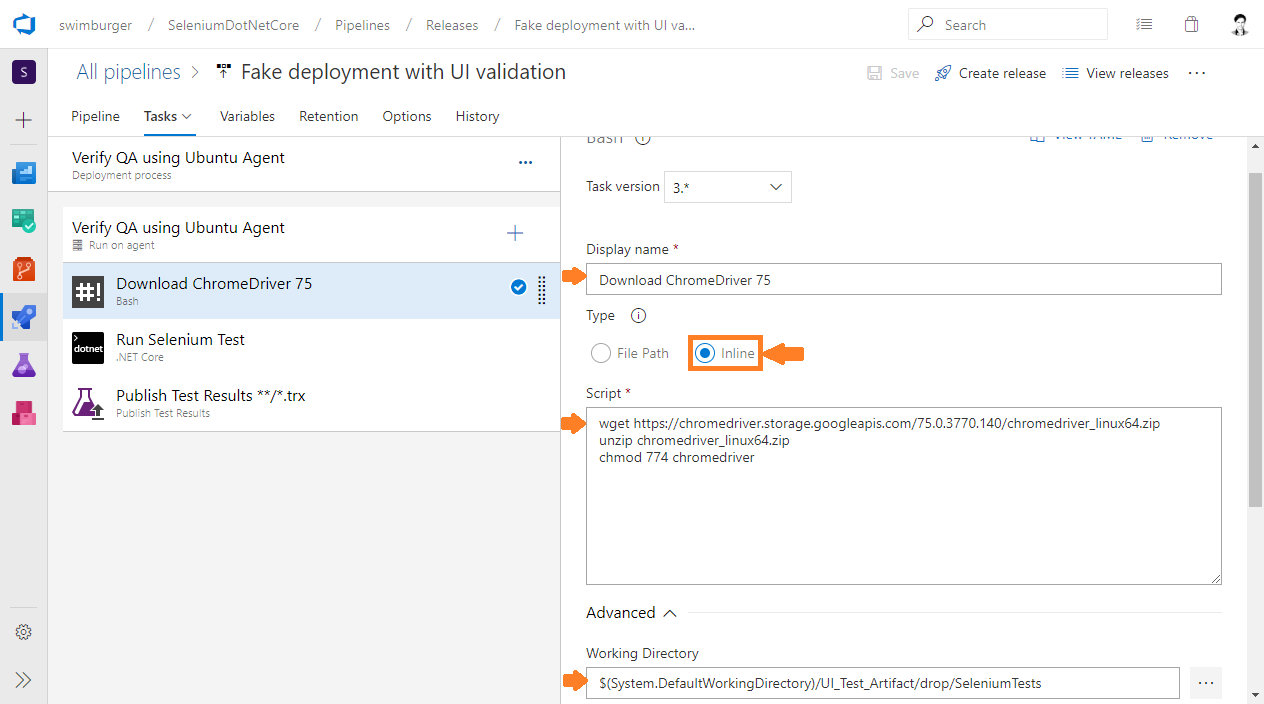 Add a "Bash" task and configure the task to match with the screenshot above:

The logic for the bash script is the same as the PowerShell script, except on Linux you need to change the permissions of the chromedriver before it can be used.

You may notice that the PowerShell script is pretty much the same as the script for Windows, very cool! 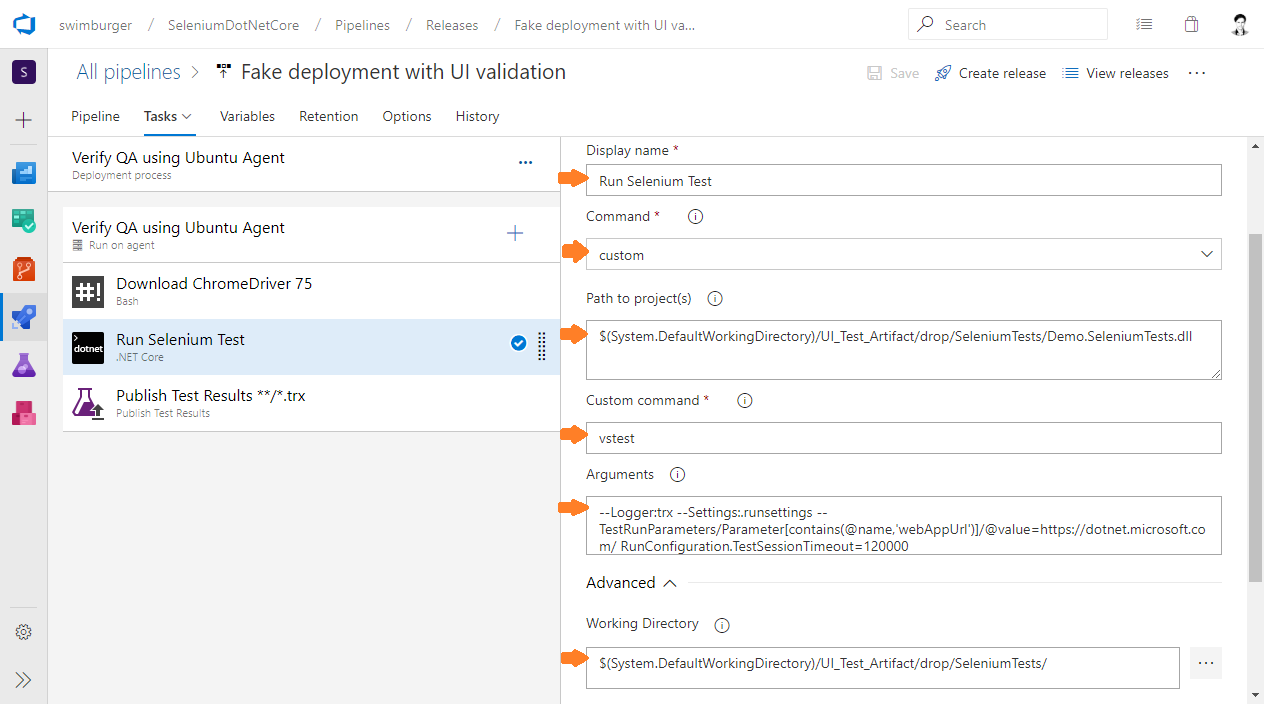 Add a new ".NET Core" task to the job and match the configuration with the screenshot above:

Add a "Publish Test results" and match the configuration with the screenshot above:

Now that the release pipeline has been created, you can test it out by creating a release. 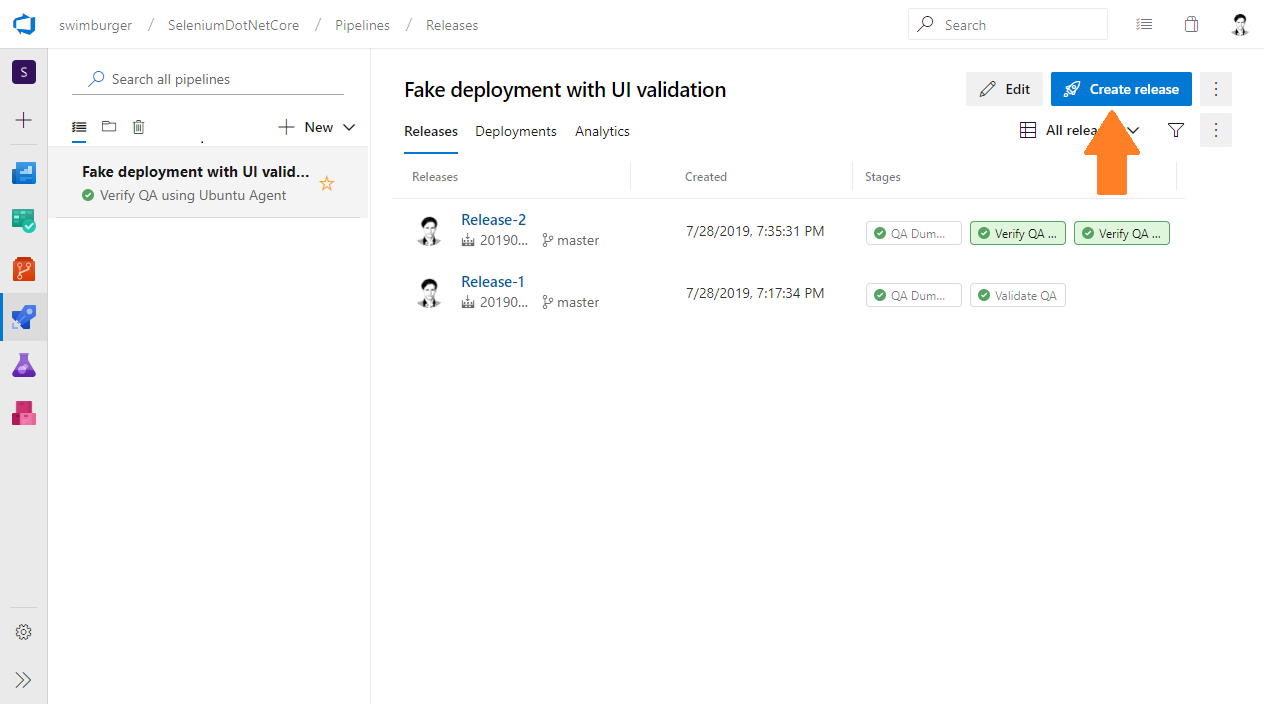 Navigate back to the releases overview screen and click the "Create release" button. 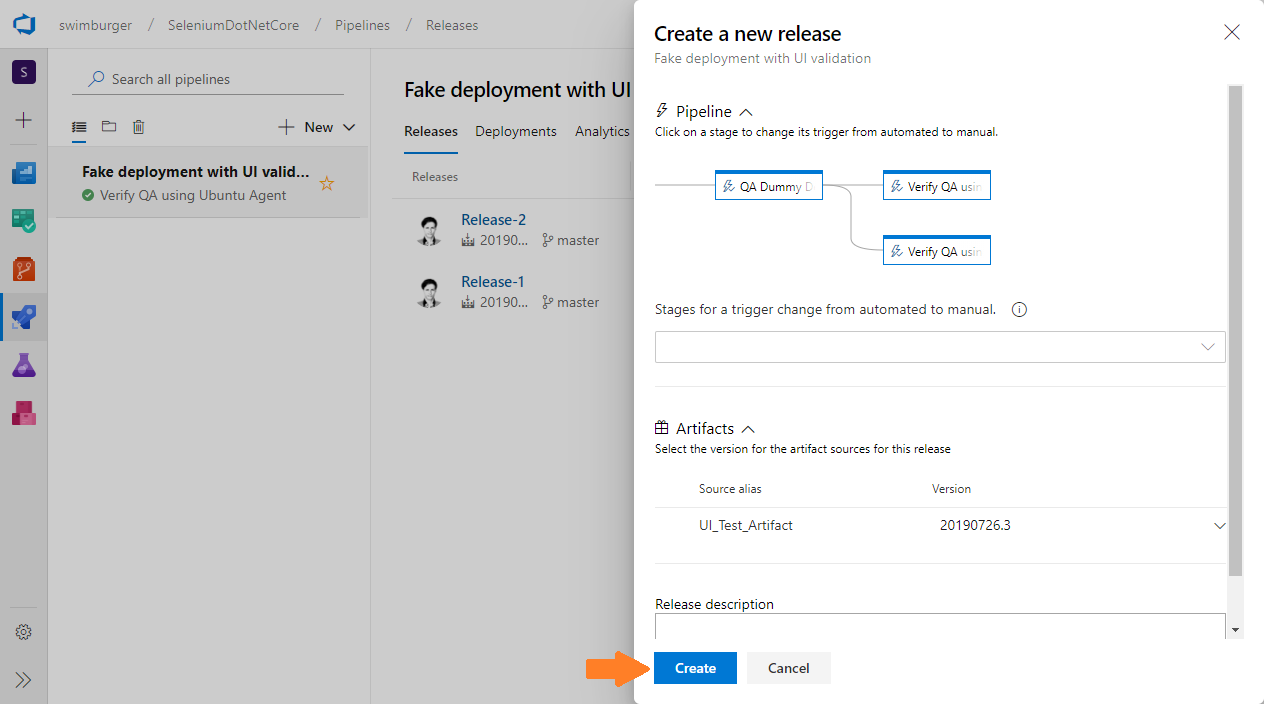 After the "Create a new release" details screen pops up, click the "Create" button. 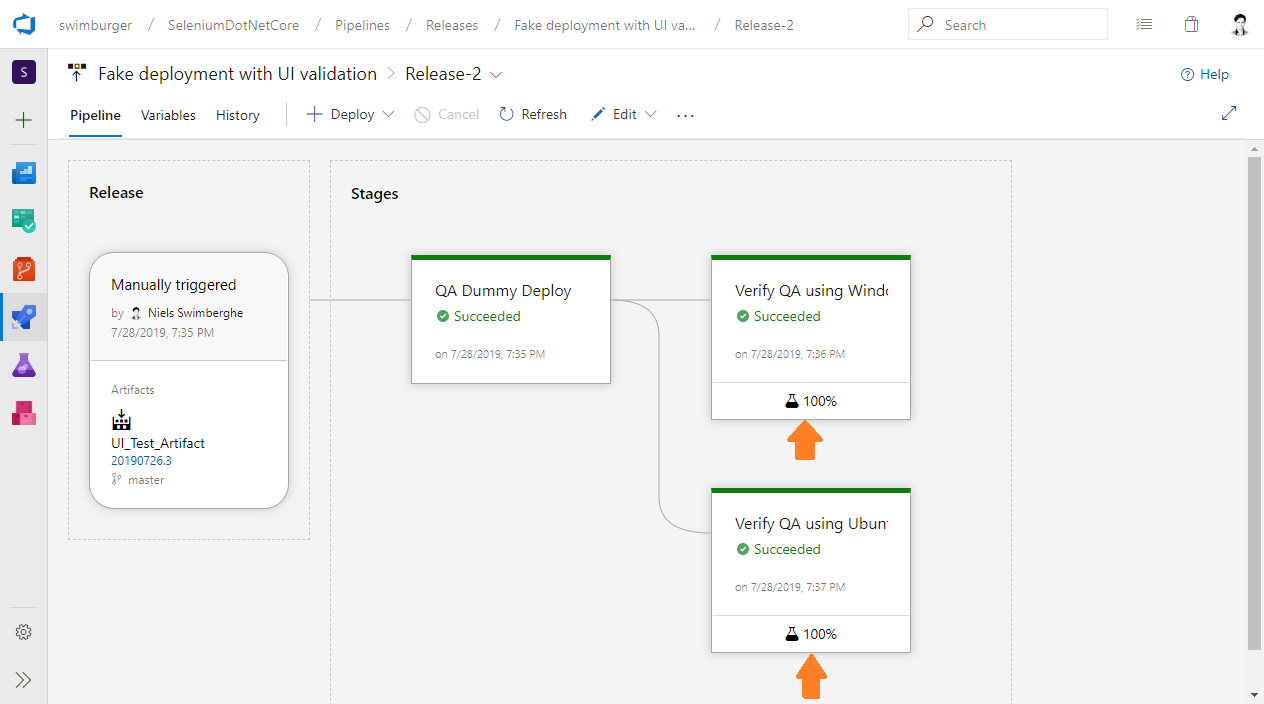 While the release is running, you can inspect the progress and see the changes in real time. 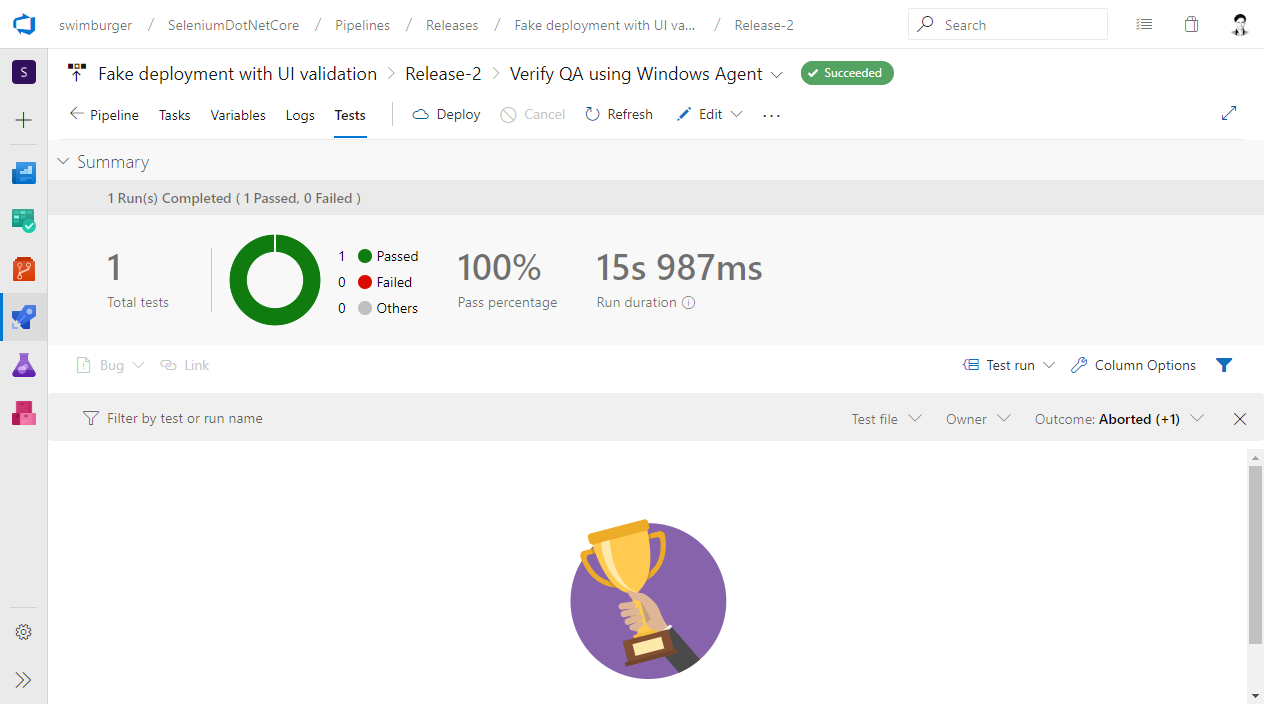 When clicking inspect a specific stage you can find more details including the test results.

In this guide you learned how to

You can expand this example to deploy to production if all UI tests succeed and then verify production with the same UI test logic. Usually automated UI tests aren't sufficient, so it's a good idea to add a pre-deployment approval gate. The approval gate can be approved by a QA engineer after doing additional exploratory testing.

How to UI test using Selenium and .NET Core on Windows, Ubuntu, and MacOS

7/25/2019 - .NET
Selenium is a browser 🌐 automation tool mainly used for UI testing and automating tasks. Selenium is agnostic of operating system, programming language, and browser. You can automate Chrome on MacOS using C#, FireFox using Python on Windows, or Opera using NodeJS on Linux to give you a few examples.

5/28/2019 - Azure
Learn how to purge Cloudflare's cache as part of your Continuous Deployment. This post will walk you through creating a PowerShell task that interacts with Cloudflare's API to clear the cache. This task will run as part of an Azure DevOps Pipelines.