This post assumes you're already familiar with EF Core and LINQ queries. If you are not, give Microsoft's "Getting Started with EF Core" a read.

There's many ways to deal with SQL databases in .NET. There is SqlClient for interacting with databases using raw SQL statements. There's also Entity Framework (EF) and other Object-Relational Mapping (ORM) libraries such as Dapper, NHibernate, etc.

Entity Framework is a powerful ORM and makes it easier to deal with SQL databases in various ways such as:

A common counterpoint to using ORM's is that the generated queries don't perform as well compared to manually written SQL queries. But what if I told you, you can have both? More on that later.

Your application ran fine at initial launch, but now the data has exponentially grown and as a result your LINQ query performance became slow. To diagnose the performance of the query, you need to figure out which SQL statement is generated. There are built-in ways to output the SQL statements in EF Core, but by far the easiest way is to use a free tool called LINQPad. 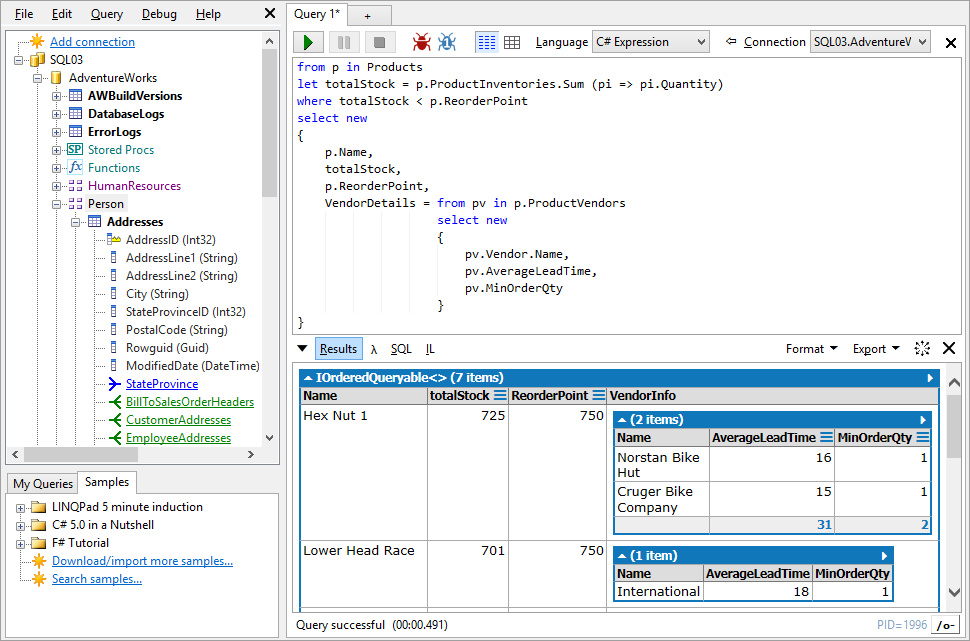 Using LINQPad, you can point to your DLL so it will understand your DbContext and from there on you can write LINQ queries in the tool. The tool will show you the resulting data, the SQL statements, and other details. Using this data writing new queries and optimizing existing queries becomes a breeze.
But what if you simply can't achieve the desired query using LINQ? Let's learn about using Raw SQL queries.

Consider purchasing a paid license to support the development of this free tool.

You tried optimizing the LINQ query, but the required performance isn't achievable using LINQ Queries. Luckily, EF provides a Raw SQL API as an alternative to the LINQ API. But why would you still use Entity Framework when using Raw SQL Statements?

One of the great things about EF is that you don't have to go ALL IN. You decide which features are useful to your project. Here's an ASP.NET Core sample to query data using Raw SQL but still have EF map the data to .NET objects:

The sample above queries the Pets table and filters by the specified type. Once the data is returned from the database, EF still maps the data to concrete .NET objects. In this case the data is being mapped to Pet objects. Keep in mind that Change Tracking still functions even when using `FromSqlRaw`. The above query is a very simple example, but you can plug in whatever SQL Query you need to fulfil your requirements.

You were able to create a Raw SQL query which resolved your performance issues. Huray! But a DBA has joined your team and wants to move the query to Stored Procedures.

In the sample, the pets are being queried again using `FromSqlRaw`. This time the Raw SQL statement simply calls the Stored Procedure and the type parameter is passed to the Stored Procedure.
In this case Change Tracking also still functions as usual.

When LINQ queries can't meet the performance requirements of your application, you can leverage Raw SQL and still have EF map the data to concrete .NET objects. You can also invoke Stored Procedures in case the logic of the SQL queries need to reside in the SQL Database.

9/22/2019 - .NET
Manually adding an anchor to every heading would be a painful solution. So let's learn how we can achieve this by generating the Heading Anchors using the HTML AgilityPack .NET library.

How to UI test using Selenium and .NET Core on Windows, Ubuntu, and MacOS

7/25/2019 - .NET
Selenium is a browser 🌐 automation tool mainly used for UI testing and automating tasks. Selenium is agnostic of operating system, programming language, and browser. You can automate Chrome on MacOS using C#, FireFox using Python on Windows, or Opera using NodeJS on Linux to give you a few examples.